How to Move a Trampoline: Tips for Packing and Transportation

Home » Blog » How to Move a Trampoline: Tips for Packing and Transportation 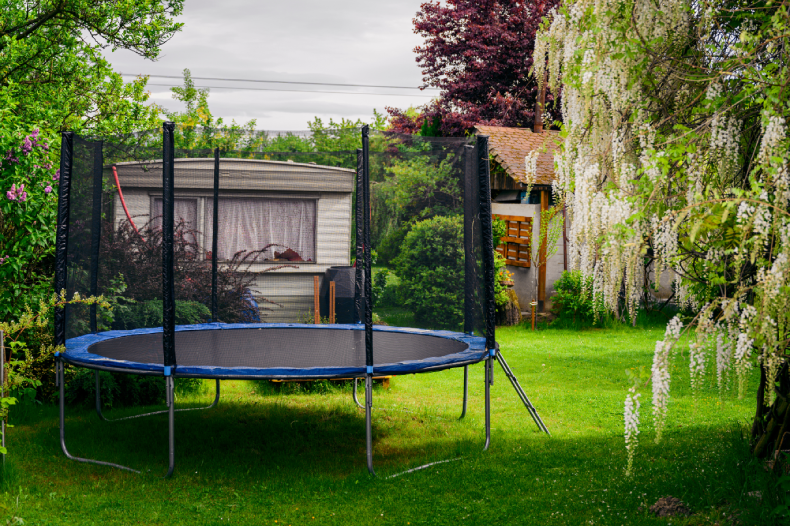 Trampolines can be mad fun. They are a great way for the kids to unwind, and who knew? – keep fit too! But trampolines are not just a preserve for children. They are a nice way to let your inner child out without making a fool of yourself or looking goofy in front of everyone.

In fact, jumping on a trampoline is a form of cardio with numerous benefits. For instance, it can improve oxygen circulation in the body and boost your heart health too. It’s a fat-burning exercise that also improves agility and balance. Good low-key muscle builder too!

But it’s not all fun and games when it comes to moving a trampoline. Sure, moving a trampoline for kids or smaller adult models can be easy-peasy; you don’t even need to take them apart. But large and heavy adult trampolines – which form the basis of our discussion – can pose a bit of a challenge.

What are the Main Difficulties in Transporting a Trampoline?

The main problem when moving a trampoline is that you cannot move a large trampoline such as a 20- or 23-footer by yourself. Which is not surprising really considering this is a piece of equipment built to withstand hundreds of pounds of weight bouncing on it for hours on end.

Dismantling it is always an option, but that’s not a task that will get your pulse racing in all honesty. Besides the reluctance that comes with taking a trampoline apart, the actual process of disassembling it is not as easy as shooting fish from a barrel. Assuming you know how to disassemble a trampoline in the first place.

But it’s in the reassembling where all the work is. Piecing the parts of a larger trampoline – from the jumping mat, to the frames, springs, poles, enclosure net, etc. – and trusting it to hold up, is not easy.

But it doesn’t mean it cannot be done.

What Equipment is Needed to Move a Trampoline?

The equipment needed for trampoline moving depends on the method you want to use to transport it. We have discussed how to transport a trampoline without disassembling it in the next section.

If you plan to move the trampoline by stripping it apart, below is a list of the tools you will need to get the job done. We want to assume you have an idea of how to take apart a trampoline?

Gather the following tools and materials:

As far as the actual disassembling and reassembling of a trampoline go, basically you can get by with the first three tools. An extra pair of strong arms could be useful too!

What is the Best Way to Move a Trampoline?

In the case of the latter, you need a large truck if you plan to move a trampoline without disassembling. Or a trailer.

Small trampolines are easy to move, whether you’re shifting the trampoline around your backyard or ferrying it halfway across the country. You don’t need to disassemble them as that’s only creating a hassle you do not need. Unless, of course, you want to do it to save on space or avoid damage if you’re bunching it together with other belongings.

In the case of huge trampolines, the best way to move them is to take them apart. If you’re not the handy type, you might need to enlist some help such as hiring residential movers. Reason being that finding someone who knows how to take a trampoline apart to do it for you is not easy. Even if you manage to, who will help in the assembly when you get to the destination?

All that said, you also need to take distance into consideration. Short distances do not warrant moving a trampoline as individual components, regardless of size. Unless you have the expertise at hand.

For that, you need to know how to move a trampoline without disassembling it.

How to Move a Trampoline Without Taking it Apart?

Moving a trampoline without dismantling it calls for both brain and brawn.

The first thing you need to do when trampoline moving is to figure out a way to get it to the waiting vehicle (see strategies below). Your choice of technique to move trampoline should be largely informed by:

Once you have decided on the approach to move the trampoline, proceed to plan and clear your route to the waiting vehicle. From there, it’s all hands on deck.

The above trampoline moving methods are not only for moving a trampoline around your backyard. They are still the techniques you will use to carry the trampoline to the waiting vehicle.

If you want to move a large trampoline long-distance – which we assume is the case here since you’re probably moving in spring or taking the trampoline to a different location – the best way is to use either of these two methods:

These methods will likely need more than two people to avoid dropping the trampoline and damaging the frame.

How to Disassemble a Trampoline for a Move?

If you intend to move the trampoline as individual components, it is important that you know how to disassemble a trampoline.

If you have no idea how to take apart a trampoline, worry not. The steps involved are nothing like quantum physics:

That’s how to disassemble a trampoline for moving.

Unless you’ve done it before, moving a trampoline can be daunting. If you’re not confident in your abilities or would rather avoid the headache, you can always call upon a professional moving crew to bail you out of the pickle.

But as the steps we’ve outlined indicate, it’s not the hardest task in the world either. With a little elbow grease and some extra pair of hands to assist, you can crack the puzzle.