Moving from NYC to Chicago: Tips for Relocation

Home » Moving from NYC to Chicago: Tips for Relocation 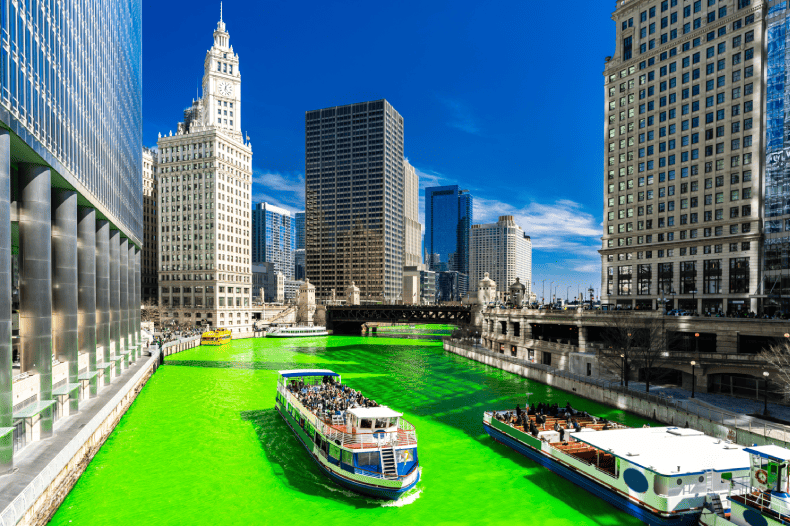 So, you’ve made the decision to move from NYC to Chicago…

It’s easy to get caught up in the search for good neighborhoods in the destination city and the things you can expect when you switch allegiances. Which is all nice and dandy, but you shouldn’t overlook the more boring stuff: planning for the nitty-gritty of the move – booking a moving company, changing schools if you have school-going children, transferring utilities, and all that.

The thing with long-distance moves like this one is that they leave little room for error. You don’t have the luxury of making multiple trips, so the preparation needs to be exactly right. And that’s why we’re here. If you’re contemplating moving from NYC to Chicago, we’ll detail some of the most important aspects you need to think about in order to make your move less frustrating.

Pros and Cons of Moving from NYC to Chicago

The culinary scene is undoubtedly one of the greatest, and the City that Never Sleeps even has a nightlife mayor.

The NYC art and film scenes have no equal, and the pulse of the city is what defines New York. Yellow taxis whizzing down Fifth Avenue, Times Square, and Broadway, saxophones in the subway, New York-style pizza, joggers in Central Park, the unique vibe of the holidays, and the obligatory Christmas tree at the Rockefeller Center…we could go on forever.

However, for all the countless nice things that draw people to the Big Apple, the city is not without its downsides – the steep costs, the high population, of not too personable locals, the apartment sharing with strangers, the workaholic culture, the tourists, the concrete jungle…

It’s not surprising that New York has been witnessing the biggest population loss of any place in the United States in recent years, with the outflow accelerating since the COVID-19 pandemic.

So, if you’re planning to move from NYC to Chicago, you’re not alone.

In fact, whether you are born-and-bred or just one of the many that put down roots in the city, there’s plenty to look forward to when moving to Chicago from NYC.

The affordability – The exorbitant cost of living in New York is legendary, and those swapping the East Coast for the Midwest will be pleasantly surprised. The average cost of renting a one-bedroom apartment in NYC swings between $2,500-$3,500 in any given year. In Chicago, $2,500 gets you a 2-bedroom apartment, with a 1-bed apartment hovering under $2,000.

Convenient and cheaper transportation – The Big Apple has a more extensive subway system, but delays have become a common issue for commuters. Chicago, on the other hand, gives you options, whether that be the bus system, train, driving or even biking. Traffic in Chicago might not be the best in the world, but it’s much better compared to New York.

Nature and scenery – Nobody denies that NYC has a captivating skyline and its share of breathtaking views. But for anyone looking for greener spaces and more open-air views, the Windy City – which has a magnificent skyline of its own – doesn’t disappoint at all. There are stunning lakefront views everywhere you turn, with more than 20 miles of beaches and parks. Lake Michigan, like most attractions in Chi-town, is easily accessible.

Clean streets – Trash bags are a common sight in some corners of New York. Chicago is by comparison a much cleaner city, and while the alleys may not be the most pleasant-smelling, rarely will you encounter excessive trash on the sidewalks.

Ease of living – Life as a New Yorker is not a Sunday picnic. Due to the impracticability of owning a car in NYC, simple tasks like in-person grocery shopping take a big deal of effort. In Chicago, there is none of that inconvenience. Getting groceries is a breeze; so is running errands like furniture shopping. And yes, getting to the airport is much easier too.

Lower population density – It is not until you move from NYC to Chicago that you’ll start enjoying even simple experiences like walking on the sidewalk. The hordes in New York are just something else, and waiting lines are a regular thing at the various attractions, and restaurants; even when queuing for tickets or promotional giveaways.

So, does Chicago have any downsides?

Of course, it does, especially given its position as the largest city in the Midwest (third largest in the country).

Crime rate, for instance. While the rate of crime has been going up in New York in recent years, Chicago is not the safest city in America either. Likewise, while the cost of living is considerably lower than New York’s, Chicagoans have to put up with some of the highest taxes in the country.

Traffic can be a nightmare in the city of Illinois, and it doesn’t score too favorably on the ozone pollution index. What’s more, winters in the Windy City can be more unforgiving.

So, if you are planning on moving from NYC to Chicago, it’s upon you to weigh up how the pros stack up against the cons.

However, despite the downsides (of which no place is without its fair share), there’s plenty to love about Chi-town – the Midwestern charm, the friendly people, the slower pace, the sports teams, the neighborhoods with character which the boroughs are really no match against…in addition to everything else we highlighted.

Cost of Moving from NYC to Chicago

The cost of moving from NYC to Chicago is dependent on a whole list of factors.

For starters, how do you plan to do it – rent a moving truck or sign up with an interstate moving company? A DIY move from NYC to Chicago may seem lower than hiring a mover, but you’re not saving as much as you think. Gas is on you, as are the packing materials. You’ll also probably need equipment, not to mention the muscle.

When you weigh it all up, many have no hesitation in opting for the moving company option as movers make your life much easier – especially given some of these movers have a good lay of the land and know what to expect and anticipate for better than you.

Question is, how much do movers charge for moving from New York to Chicago?

The size of the move has a huge bearing on cost – are you moving to a 1-bedroom house or 3-bedroom? How much of your belongings are you taking with you?

Additional services like packing and unpacking will also affect the cost, as well as other variables like stairs, elevators, etc.

If you’re looking for a ballpark figure, you can expect to fork out in the region of $4,000 to $7,000 for a 2-3 bedroom move from NYC to Chicago. However, the best way to get an accurate quote is to request for a moving estimate from the moving company.

The Best Neighborhoods to Move to in Chicago

Being among the largest cities in America, both New York and Chicago are incredibly diverse. However, while the neighborhoods in New York may host a predominant community of people – Italians, Polish, Chinese, etc. – Chicago neighborhoods are more homogenous so much so that a Chinese neighborhood, for example, may be largely comprised of the same people.

This adds to the uniqueness of the neighborhoods which might feel starkly different even in the case of adjacent areas.

Chicago is a city of many neighborhoods – 245 to be exact. The city is cut into four official sections: Downtown, North, South, and West. Choosing your ideal place to live will hinge on the usual factors that inform our neighborhood choices – cost of living, amenities, safety, lifestyle fit, commute, schools, and so on. Here are a few ideas to get you started on the choice of the neighborhood when moving to Chicago from NYC.

Tips for Relocation from NYC to Chicago

As we mentioned earlier, making a move from NYC to Chicago is not like moving across town. For that reason, it’s important to plan accordingly, and below we share tips that will help you in that regard.

What is important to know when moving from NYC to Chicago?

When moving from New York to Chicago, there are a few important things worth keeping in mind.

For starters, the distance separating New York from Illinois’ largest city is 800 miles. You thus need to figure out the most convenient way to get there and if you’re on a budget, to do so without spending a fortune.

Do you plan to rent a truck or hire a moving company? And even in the case of the latter, are you looking at a full-service move or partial service?

If you are traveling with family (kids especially) plan for multiple stops along the way if you’re driving and consider booking a place to spend the night in advance.

Remember that driving from NYC to Chicago takes 12 hours, so in addition to rest stops and sleep-overs, you need to plan for the drive itself and by this, we mean having a designated driver, whether that’s you or someone else.

Lastly, don’t forget to schedule utilities for your new place in advance. You don’t want to get to your new digs only to find essentials like water, electricity, or heat not working.

By planning for the move from NYC to Chicago in advance, you are better able to anticipate the move better and plan around any inconveniences.

Moving from NYC to Chicago is an interesting prospect.

Unlike most other places, swapping the East Coast for Chicago shouldn’t feel like much of a downgrade considering it’s the third-largest city after New York and Los Angeles; only this time, there is no overcrowding, waiting endlessly in queues, paying an arm and a leg for small living quarters and all that.

If you’re taking your belongings with you, hiring a moving company can also prove a wise idea when moving to Chicago from NYC. A good interstate mover will make the move way more seamless and less stressful for you.